An analytical report from Coin Metrics has delved deep into the world of Ethereum transaction fees noting that they’re still at highest-ever levels and even a much touted approaching network upgrade is not able to solve the complex problem.

According to the Ethereum Gas Report by Coin Metrics, average fees on Ethereum have been countineously over $10 for most of 2021 compared to the 2017/2018 bull run where average fees reached just $5.70 at the height of.

It resulted in some of this increase to the increase in ETH prices themselves which will make gas more expensive. From the beginning of 2021, ETH has surged 125% to current prices despite a correction of 19% from it's all-time high of $2,050. However, over the same period, the median gas price has seen a 532% increment.

Several types of transactions require different amounts of gas. A simple ERC-20 token transfer uses less gas than a complex smart contract operation for an automated market make. However, it noted that rather than DeFi being the reason behind the high gas fees, it is putting transactions in general.

“Since January 2020, the amount of gas used per transaction has trended downwards. This shows that increased transaction complexity is not responsible for high transaction fees.”

Ethereum transactions are currently auctioned, with those paying more gas taking miner priority and getting faster transactions than those that have set a lower gas limit.

The report shows that gas fees are high right now because the blocks are consistently full, around 95%, and have been since mid-2020 and the DeFi boom. For March 2021, Ethereum blocks have been 97%-98% full, the research found. 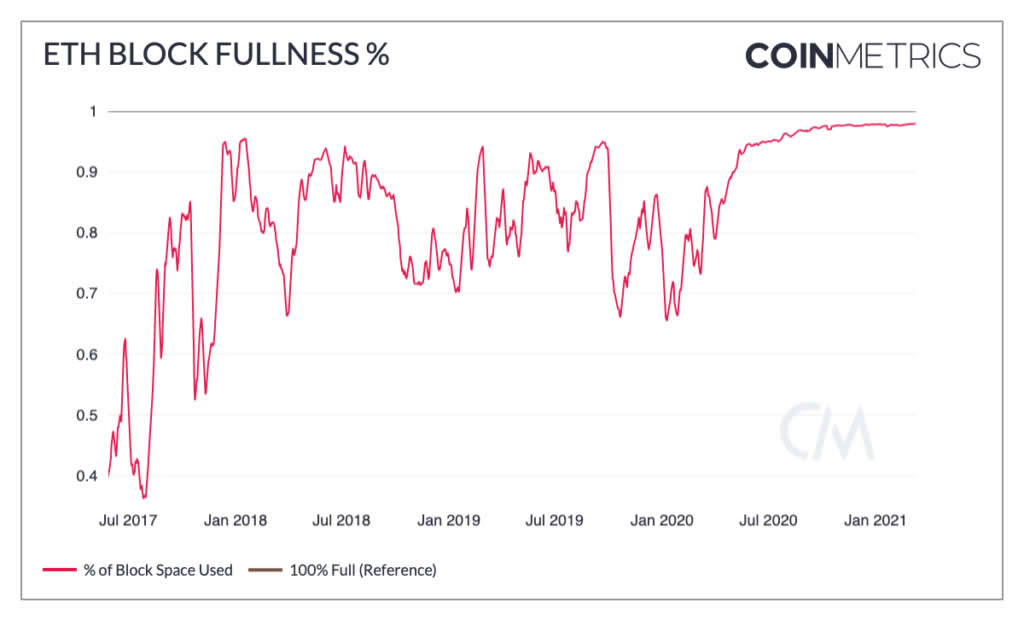 It explained that miners have to specify which transactions to count when mining new blocks and each block can only include a limited number of transactions (on average 160 to 200) due to the maximum block size.

“So miners naturally prioritize the transactions with the highest gas prices since they will earn them more money if these transactions are included.”

In the conclusion of the report, the highly anticipated EIP-1559 network upgrade, which has been designed to change the auction mechanism and burn some of the fees, is unlikely to solve the problem of increasing gas fees, and only scaling solutions will be the true long-term fix.